It isn’t too rare for clubs to have their own special club ties, and your own club might also have its own distinctive cufflinks. Using both is a great way to foster a sense of club community, but it does mean that you’ll need to think long and hard about how well those cufflinks and ties are going to match each other. 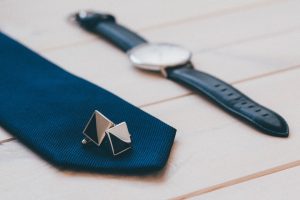 One of the mistakes that people tend to make when matching cufflinks to ties is getting things too close. Picking the same colour for each is going to make them look like they came out of a pack, which is something that you want to avoid – it just looks a little cheap and unimaginative. Instead, pick colours that nicely complement each other. If you have a club tie that uses several colours, try picking the least dominant colour to match your cufflinks with. This will create a sense of uniformity without matching too clearly.

When you’re designing a bespoke club tie, it’s generally best to keep things a little muted. Adding your club’s colours or crest is going to be fine, but ties that look a little ‘novelty’ are generally going to be perceived as unprofessional and tacky. Cufflinks are obviously a lot smaller, and this means that you can go a little bolder with their design. If you’re a golf club, it might have looked a little on the vulgar side to have a club tie styled with lots of golf clubs, but picking cufflinks with a golf club design on their face will be more acceptable and nicely distinctive.

Go for Silver or Gold if You’re Unsure

Ultimately, simple silver and gold cufflinks are going to work well with almost any tie and outfit. That doesn’t mean you necessarily have to pick simple silver and gold designs, but it’s a good idea to go for that option if you’re struggling to make a decision. Perhaps your members tend to wear very different kinds of clothing, or maybe you want to keep the design quite subtle; in either case, going for plain silver or gold is unlikely to be a decision you live to regret.