Suits can make any man look great, especially when it is tailored to perfection. They bring out a sharpness effect that separates casualness from formality. Worn to weddings and red carpet events, they are a must have for any man with a sense of fashion or without one. The silhouette emphasizes the ideal masculine body so well that even badly postured men can stand out in well fitted blazers. The following is a list of men who wear suits well and are known for it- they’ve hit the red carpet in fashion throughout 2014. 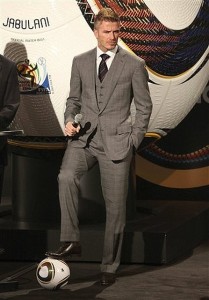 David Beckham is one of the best dressed men on the planet. He can wear virtually anything and still look good.  However, he is transformed into a dashing gentleman when he wears a sharp suit. He is known for donning Ralph Lauren suits in greys, black and blues. His most iconic look is the three-piece tail coat suit and top hat from Ralph Lauren- worn to the Royal Wedding.

Clooney is another Celebrity known for dressing like an A-lister. He’s can make wearing a suit seem effortless. Always perfect on the red carpet, George Clooney has been voted ‘sexiest man alive’. It’s no wonder designers always want to dress him for the red carpet. Some of the suits he has worn include Giorgio Armani, Dolce and Gabbana, Gucci and Brooks Brothers.

Justin Timberlake not only wears suits to red carpet events but also wears them in his music videos. The singer even when on ahead to sing a song about suit and tie. His fashion has evolved tremendously from his early days of cornrows and denim.

Jamie Dornan  lives up to his onscreen character Christian Grey by looking dashing in a suit.  The Irish actor is known for preferring plainer slim collar suits for his red carpet appearances. 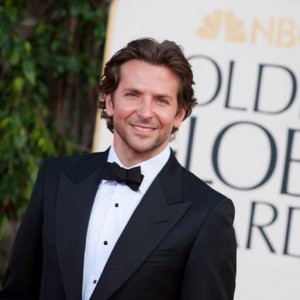 Bradley Cooper is a good looking guy who dresses casually on screen and in real life. When he wears a suit he stands out. When it comes to the colour of the suit he can wear any colour from whites to oranges and creams-  and even the darker tones of blue, grey and black. He also wears different brands of suits from Tom Ford, to Vivienne Westwood Men to Giorgio Armani and Gucci.

Ryan is a favorite Hollywood actor and he looks great in a suit.  Just like Bradley, he is quite adventurous when it comes to colour and style. He goes for a variety of styles from double breasted lapel jacket to super fitted suit – always dressed to perfection.

James Franco who dresses slackly onscreen, cleans up well when he goes to the red carpet. The actor went on to be the face of Gucci suit services.

Pharrell Williams revolutionized fashion by wearing short suits to the red carpet. His short suits had caused a stir on the red carpet in 2014 and we hope the trend makes its way into mainstream fashion. The music is always banging from him and so are his classy suits.

Leonardo has been known for wearing suits on screens from J. Edgar to the Wolf of Wall Street- he never ceases to impress. On the red carpet to onscreen his style is immaculate to the best. He is getting on a bit now, but still manages to pull off almost any suit he wears.

Jude law can wear a formal suit with a shirt and tie, or put a twist on it with a casual t-shirt and still look great. The English actor has over the years dressed perfectly at almost any occasion. He is a handsome guy with a fashion sense that is classic Brit- we all would love to emulate him in a suit.